On January 14, Lviv hosted the presentation of the Derevyanko. This is a 4-meter wooden puppet for street performances, created by war veterans to give joy to adults and children.

Derevyanko will become a hero of bright street performances in Ukraine and will participates in festivals abroad to bring joy and happiness to adults and children. Merry and sincere Derevyanko will show by his actions that the main feature of a person is to do good deeds. Even if this person is a puppet made of wood.

The performance together with Derevyanko was created by ATO veterans, group “LIRWAK”, pioneers of Ukrainian DJ’s Derrick & Tonika, Garry Shumoff and all people of good will. Symbolic was the fact that children from Stanitsa Luganska and volunteers were singing carols together with war veterans who defended this city in 2014-15 from Russian attacks. Children from the front-line territories came to Lviv as part of the project “Mosaic” created by well-known singer and director Ulyana Gorbachevska.

The event took place on January 14, 2018 in the Park of Culture and Recreation named after B. Khmelnitsky in the framework of “Your Holiday in the Park” winter program. 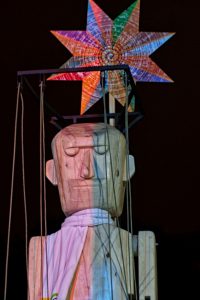 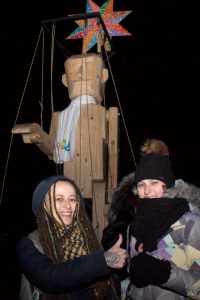 The volunteer Nazar Vitrikush before the war had the idea of creating the huge wooden puppet. During 2017, the training organized by YMCA-Lviv formed a team of veterans who helped the combat fellow realize this dream. Joint work has become a new experience and art therapy for veterans who decided to found  the “Street Marionette Theater” with the creation of the Derevyanko. Street scenery scenarios for Drevyanko will be jointly developed by war veterans and artistic leaders.

Derevyanko will be moved by a telescopic forklift truck, simulation of walking will be performed by project participants using special fasteners. There are 10 guys to manage the moves of Derevyanko with simultaneous concerted actions. These will be spectacular performances with musical accompaniment, intricate costumes and engagement of viewers.

The main idea of creating the Derevyanko – to demonstrate how simple good deeds can be used to overcome propaganda stamps and information manipulations.

Supported by the Democracy Grants Program of the U.S. Embassy in Ukraine. The views of the authors do not necessarily reflect the official position of the U.S. Government.