“Game about us” was written in a scientific article in Poland

“Game about us” was written in a scientific article in Poland

The Lviv atrical initiative “Game about us”, created for the adaptation of immigrants from the Crimea, was published as an article in the collection of monographs of the University of Warsaw.

“The game about us” was held in 2015-16 on the initiative of Lviv organizations YMCA and Crimea SOS. Actors of Lviv Theater Les Kurbas Oleg Stefan, Andriy Vodychev and Natalka Rybka-Parkhomenko conducted joint trainings for Lviv residents and internally displaced persons (refuges) from Crimea and from the East of Ukraine.

The result of this art-therapeutic practice was the production of theatrical performances “Labyrinth” and “21.Naked Voice” for poetry by Yuriy Izdryk, Lyuba Yakymchuk, Vasyl Stus, Bogdan Igor Antonych.

Then this avant-garde project made a resonance in society and considerable coverage in the press, and Dr. Anna Korzhenovsky-Bihun wrote in the article.

“The Ukrainian Revolution of Dignity, the annexation of the Crimea by the Russian Federation and the war in the east of Ukraine were turning points in the history of Ukrainian theater. Problems are not only artistic or economic. The theater realized its role as an instrument of anthropological defense against an armed and propagandistic attack on Ukrainian citizens “, – the author writes.

You can read the article HERE

Find out more about the project, watch the video “Game about us” and the story of 24 tv. 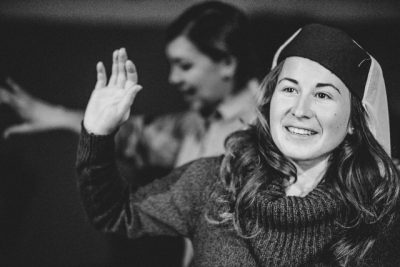 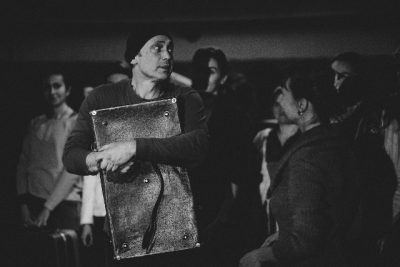 The project “The game about us” in 2015 was held by YMCA Lviv, Theater  of Les Kurbas Crimea-SOS, Crimean House in Lviv, Concorde Charity Foundation, with the support of YMCA Calgary (Canada) and UNHCR. In 2016, the initiative was continued in the framework of the project with the support of the Maltese Relief Service.